Home of the DogLeg Cafe 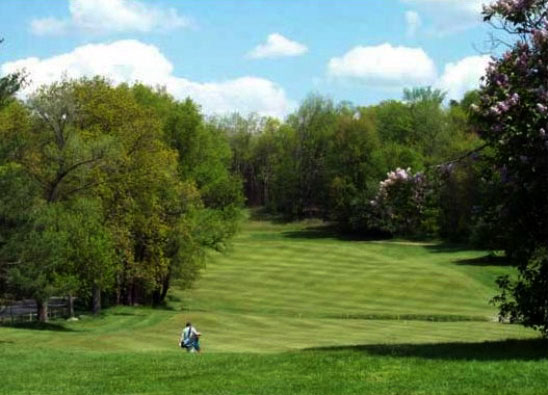 On a Saturday morning July 29th, 1932 the Bates and Sonia families realized their dream and celebrated the grand opening of their new public golf links, much to the delight of both the local Clinton and Bolton residents. The two families converted the property formerly known as the Rauscher dairy farm into the nine hole course then known, appropriately enough, as the Mountain View Golf Links. Built adjacent to the historical Runaway Brook Golf Club, the new course offered its customers unparalleled picturesque views of the country side which also included from the sixth tee a well framed shot of Mount Wachusett. The peaceful scenery certainly provided a welcome respite from the tricky situations the course provided. Although only moderate in length, even for that period, Mountain View challenged the golfers by requiring them to navigate and survive the hilly terrain and to hit precise iron shots if they hoped to land on the smallish and occasionally severely sloped greens.

The purchase of the Mountain View Golf Links, or at least most of it, by the ITT corporation in 1965 brought about many changes. Among them was a new name, Twin Springs Golf Course and the construction of two new ‘temporary’ golf holes. The new holes were to be used while a deal could be worked out to acquire the property on the north side of Wilder Road. The purchase of this property was important not only because the clubhouse was situated there but also the first two holes! It took several years, but ITT finally got the deal done, the original layout was restored and the two temporary holes were abandoned.

There have been many improvements and projects completed at Twin Springs, especially within the last ten years. One of the first of which was to replace the charming but dilapidated old clubhouse in 1995. Our General Manager, Brian Lynch, and the design team worked closely with the town and the Bolton Historical Society to construct a building that would exude the original New England charm, maintain it’s historical significance yet satisfy our patrons needs. We are very proud of the results. Our clubhouse contains approximately 900ft of retail space, a cozy snack bar and reputedly serves up the best steamed hot dogs in Massachusetts!

1996 saw the elimination of fairways which by all written accounts were previously described as “hard, parched, straw colored and frankly as dry as any you’ll see”. The installation of a brand new wall-to-wall irrigation system quickly fixed that problem and now our customers enjoy cruising around on lush green fairways of native bluegrass.

In 1999 Twin Springs was fortunate enough to be purchased by Arklow LLP, a partnership led by local Concord resident and former ITT executive Dan Weadock who became familiar with Twin Springs and The International while serving as president of The Sheraton Hotels. Dan and Brian continued to demonstrate their support for Twin Springs by funding many new improvements and programs. Very recently we’ve installed a traditional post & rail fence down the fairways bordering Wilder Road, added asphalt cart paths, added a fleet of Yamaha gas carts, and paved our parking lots. A most welcome addition in 2000 was the construction of a new practice range. The grass teeing space is nearly an acre in size with thirty hitting bays and includes several bunkered target greens to take aim at We also chose to locate our range somewhat off the beaten path amidst towering pines, giving our practice range a unique and peaceful environment from which to practice. The addition of the practice range is further testament to the mission Twin Springs has strived for during my thirteen years as the Head Golf professional. In 2005, we suffered a great loss when Dan tragically passed away, his son Dan Jr. has stepped in and continues with the mission of providing a fun affordable and ‘user friendly’ golf experience for the entire family. The continued support of The International’s Management team has allowed us to improve facilities, develop golf clinics and programs and create one of the largest junior programs in central Massachusetts. We hope you take the opportunity to enroll your kids in one of junior clinics, take a lesson with a PGA instructor or simply stop by for a quick nine and to say hello.